Our mission is to reform the institutions and structures that hold women back from running for office rather than forcing women to change. Increasing the recruitment, training, and funding of women candidates will be more effective in getting women elected at every level of government.

Below are suggestions on how to dismantle these barriers for women who want to run for office.

Recruiting gender-diverse candidates to run for office is one of the central challenges to achieving a democracy which accurately reflects its citizens. RepresentWomen challenges political parties, PACS, and donors to commit to intentional actions to ensure that more women are recruited to run. These voluntary targets mimic the quotas that are used in over 100 nations to fuel the election of women candidates.

How do we reach gender parity? 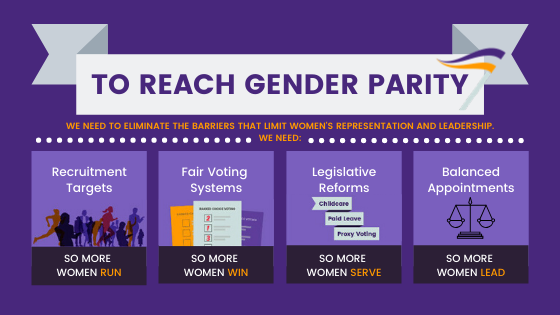 Research confirms that structural reforms - which complement current strategies - are one of the main reasons that so many countries are electing more women than the U.S.

Title IX leveled the playing field for girls and women in education and athletics while the Voting Rights Act addressed systems that disadvantaged people of color.  Although we may not realize it, within the Republican and Democratic parties, gender quotas have become commonplace in a myriad of ways. For example, gender quotas are almost always used in selecting each party’s convention delegates. This is just one example of how we must address inequality by changing rules and laws in order to have a more representative system.

In 2016, Representation2020, the Center for Responsive Politics, and Common Cause examined the break down of PAC giving by candidate gender, to find how PACs donated their money to women candidates. Examining U.S. House and Senate elections from 2010–2014 (and with the help of some 2016 data) we found that some PACs were more equitable at giving money to women candidates than others. So what PACs gave the most to women in the 2016 election cycle and what PACs gave the least?

Update on the Vermont Governor Race, and what it means for gender parity in Vermont.

The 2016 elections present an opportunity to make incremental improvements in the dismal state of representation of American women in elected office at all levels of government. Here’s what to look out for on Tuesday night.

Would we say this about a man? Changing how we talk about women in politics