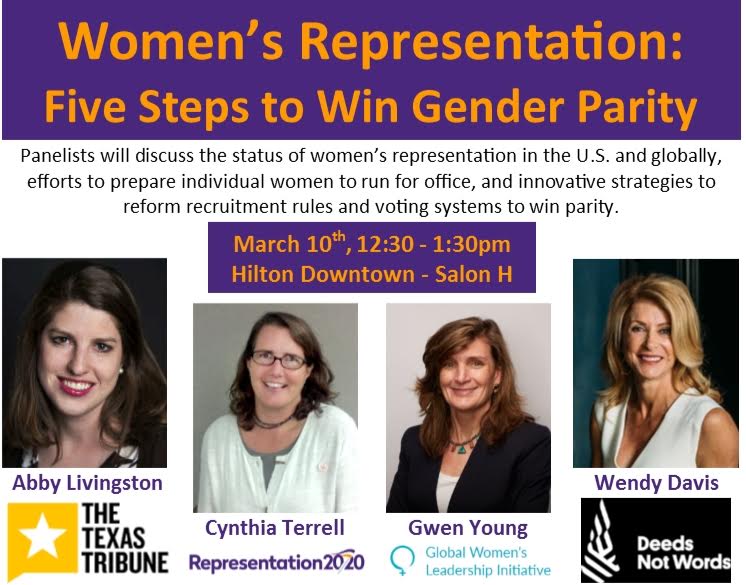 Donors suggested that if only the party had propped up a moderate, white, male candidate in lieu of Clinton, they might have won the presidency. They looked ahead to 2020, saying they won’t get behind a woman who would “cause the same problems” that Clinton did.

“That is just mind-boggling and very frustrating for me to hear,” said Davis. “We need to be very conscious that even in our progressive troupes we’ve got these problems [with sexism] and need to really push back against them. I know I did with these donors.”

Davis, who now leads the woman-focused advocacy initiative Deeds Not Words, joined Cynthia Terrell of Representation2020, which works to include more women in elected office, on the panel moderated by Texas Tribune congressional reporter Abby Livingston. Panelists discussed ways women face gender inequity in politics, and offered solutions to fix the glaring problem. And how big is that problem? Down significantly from previous years, the U.S. now ranks 104th globally in women representation in politics. Women hold just 19% of the seats in the U.S House; 21 seats in the Senate; and only four governorships, according to Representation2020. “That’s pretty sobering,” said Terrell. “Even many developing democracies rank above us.”

Texas isn’t much better, ranking 42 out of 50 in gender parity (down from sixth in 1993) nationally. Since hitting a peak in 2009-10, the proportion of women in the Texas Legislature has steadily declined. Women make up 23% of the Texas Legislature and 19% of the Texas Senate. (On the upside for the state, the two largest cities in the nation with women mayors are found in Texas – San Antonio and Ft. Worth.) “It’s very tough to beat an incumbent,” said Davis, of the state’s lack of women representation. “And it’s the reason we see a continuing challenge for women. There are so many old, white men in office here in Texas, and it can be hard for women to step up as newcomers.”

Terrell dissected the wreckage of the 2016 election, saying it was a hit for women seeking office all down the ticket. “I think there was the assumption that with [Clinton’s] win, there would be an increase of women in Congress and state legislatures,” said Terrell. “But that really didn’t happen either, which is maybe as tragic for women’s representation as the loss of the highest office in the land.”

She put forth a handful of solutions, all centered around reforming the systemic inequalities that impede women, including changing some voting systems to ranked-choice voting (like in Maine); offering paid maternity leave; on-site child care, and other work/life balance institutional changes, so women no longer have to “risk their career” to be mothers or caretakers. Other fixes include recruiting, training, and supporting potential candidates (through organizations like Emerge America, Annie’s List, She Should Run, and Ignite, for example) and participating in mentorships.

Davis recounted her own barriers while running for governor as a woman, pointing to the “Abortion Barbie” smear her opponents used against her as a way to relegate her to a single, controversial issue and force people to focus on her looks, not her ideas. “My gender was used against me in a very effective way,” said Davis. “What we find sometimes is that voters respond to those [gender and race-baiting] labels unwittingly. If pointed out, a lot of people will back up and self-correct.” Davis said one key regret of her campaign is not being honest when asked by reporters if she faced more scrutiny as a woman running for governor. “I answered ‘no’ because I would look like I was whining or wasn’t tough enough,” said Davis. “But when we see women being treated differently it’s incumbent upon all of us to name it, shame it, and bring people present to it.”

Both panelists stressed calling out sexism in the political arena shouldn’t be limited to defending female colleagues in your own party, but should extend to the other side of the aisle. Davis says she received some rebuke from her own supporters after recently defending gender-based critiques of Trump attorney Kellyanne Conway (whom she’s admittedly “not a fan” of). “Even if we have a host of things we disagree on, we need to have each other’s backs when it comes to unfair, sexism-based criticism.”