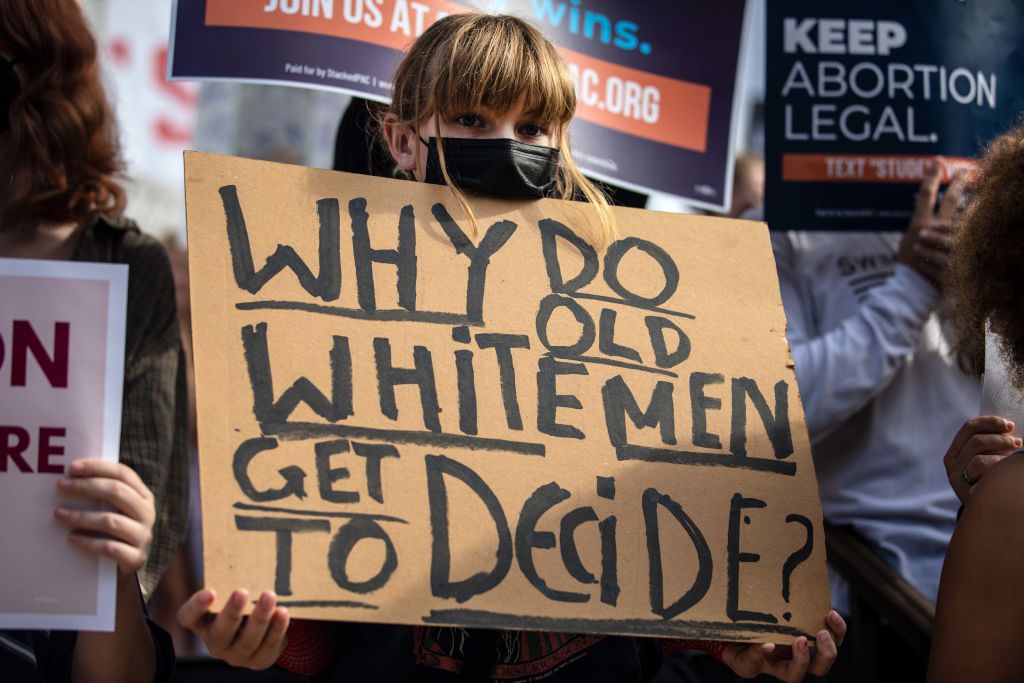 On Monday, May 2, Politico broke an extraordinary story that has sent the nation into disarray: an unprecedented leak of a draft Supreme Court majority opinion to strike down Roe v. Wade. The draft opinion holds that it is not the Court’s job to decide on the legality of abortion and that “it is time to heed the Constitution and return the issue of abortion to the people’s elected representatives.”

There’s one problem with this directive: It assumes that elected officials in state legislatures are representative, but they are not.

On average women hold just 31 percent of seats in state legislatures. There are only 15 women (11 Democrats and four Republicans) who serve as president or president pro-tem of state senates, and only six women (five Democrats, one Republican) serve as speakers of statehouses.

RepresentWomen’s 2021 Gender Parity Index found that over half of states (30) receive a D grade or worse for gender balance, meaning that representation ranges between 0-25 percent for over half the country. Representation is even worse for women of color: Only 9 percent of state legislators are women of color. 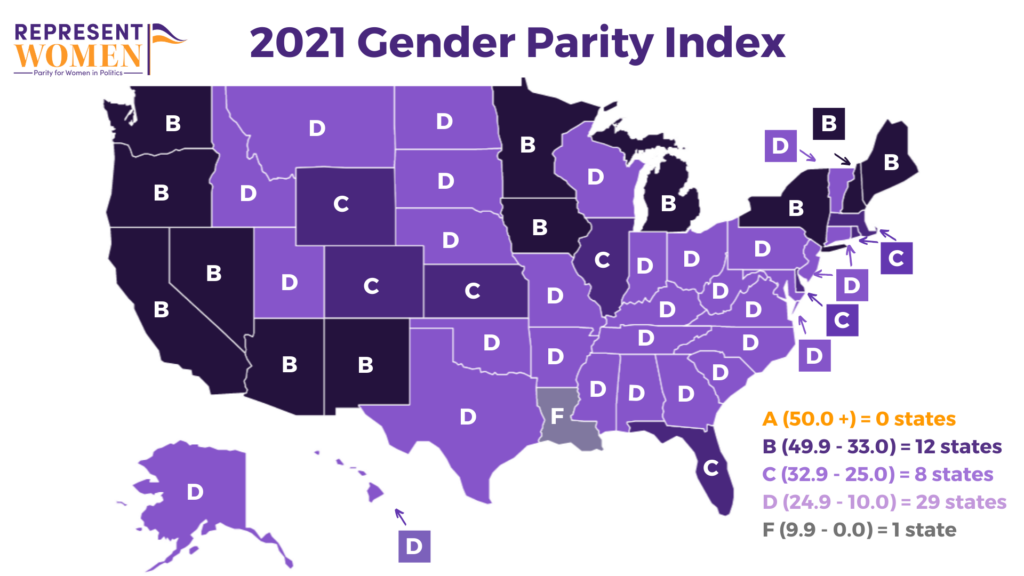 The Will of the People, or Strangled by Partisanship?

Abortion bans are not popular: 80 percent of Americans support abortion in all or most cases and 65 percent of Americans think the Supreme Court should reject the Texas abortion law. This means that, although it has become an intense partisan issue, a significant number of conservatives support the right to choose. Conservative women know what it’s like to face situations of rape and serious health risks during pregnancy, and the vast majority do want their daughters and all women to have options.

According to the Guttmacher Institute, the typical woman seeking an abortion is in her late 20s, is unmarried, already has children, and is poor. In fact, nearly half of these women make less than $12,700 per year, with another quarter very close to that poverty line. This points to much deeper, systemic issues than can be captured with the phrase “unwanted pregnancy.”

The underrepresentation of women in Congress and state legislatures make the whole notion that “people’s elected representatives” should decide the issue of abortion for these women an absolute farce.

“The greatest care should be employed in constituting this Representative Assembly,” John Adams said an 1776. “It should be in miniature, an exact portrait of the people at large. It should think, feel, reason, and act like them. … Great care should be taken to effect this…”

We’re clearly a far cry from this vision of representation.

Our state legislatures are overwhelmingly white and male due to the structural barriers built into our political system.

There has been talk about serious electoral reform for decades. Experts warned us of the dangers of a shortsighted focus on winning the next election. Now we’re facing the reality of inaction. The threat to overturn Roe v. Wade is a prime example of what can happen when women are not at the decision-making table. It’s time to take action on medium-term system strategies that ensure fair representation.

Evidence-based solutions exist: Adopting gender-balanced PAC funding targets and fair representation voting, which combines ranked-choice voting and multi-member districts, are two viable and scalable solutions that will transform the demographics of our law-making bodies in our lifetimes. These are tried and tested strategies that fulfill John Adams’s dream of a legislature that thinks, feels, reasons and acts in a way that represents the will of the people and not partisan extremes.

We don’t have to try very hard to see the benefits of gender balance. Our team took a look at what policies have been passed in the top 10 democracies ranked for gender balance, based on the Inter-Parliamentary Union’s database. This is what we found: 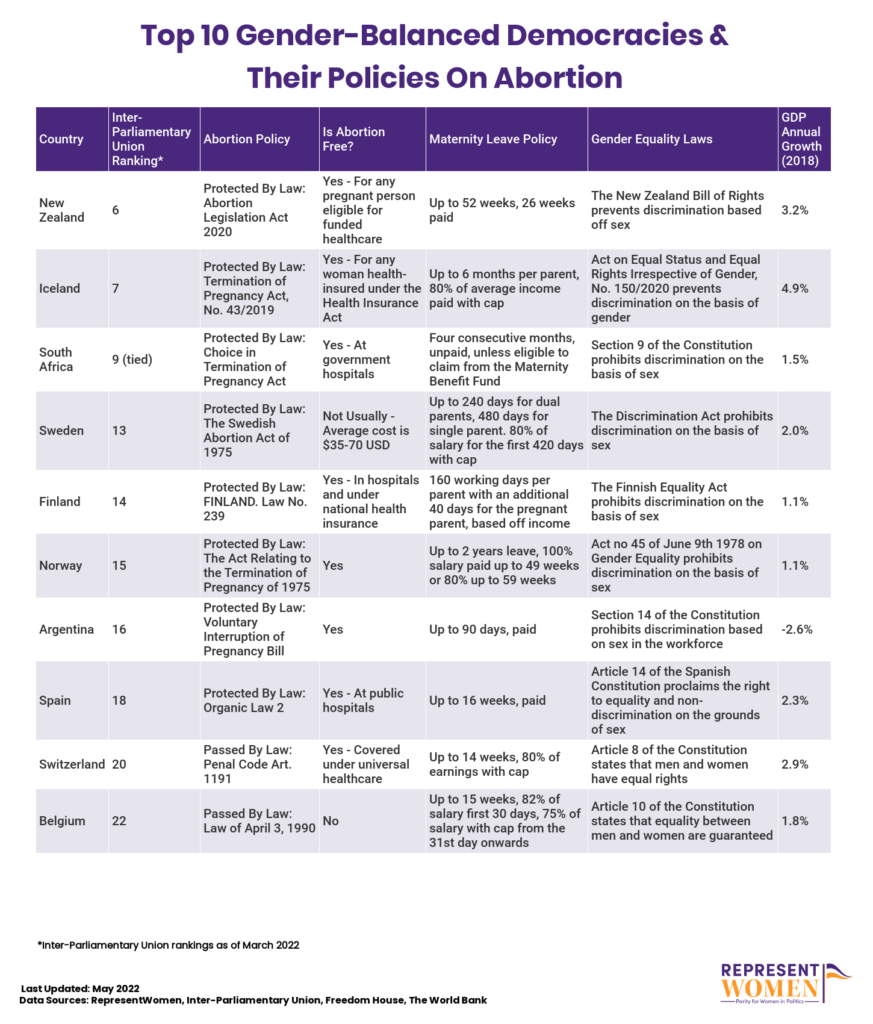 Commit To Doing the Difficult Thing

The link between women’s representation and gender-conscious policy outcomes is clear. Organizations and individuals fighting for issues like climate change, equal pay, paid leave, reproductive rights, and the like, must also fight for structural reform that removes barriers for women to run, win, serve and lead in U.S. politics.

Diverse gender balance in political representation is a structural catalyst to address upstream inequalities that plague U.S. politics, and we can no longer settle for snail’s pace progress. We need to learn from our allies in countries around the world, and commit to doing the hard work of changing rules and systems. No more settling, no more short-term thinking. The time is now.