Serving in student government is often seen as an important launching pad into higher elected offices. Educational institutions provide a way for students to become engaged in elected office at a crucial age. Understanding politics, being engaged at a young age, and being in a leadership position is a good way to spark civic interest and encourage young people to run. Richard Nixon, Ronald Reagan, and Bill Clinton all served as presidents of their student governments while in college.

As a reminder, the Representation2020 team is going to be sending regular, email updates on Friday afternoons to share information on the great work of our partners and friends on this listserv. If you’d like us to include something, please email me and/or Cynthia with a link or attachment by Friday morning. In supporting each other, we ask that you “like,” share, “<3,” retweet, and post in the comment sections of these various pieces.

Would we say this about a man? Changing how we talk about women in politics

In a now infamous soundbite from a Rolling Stone interview this past September, Republican presidential nominee Donald Trump said of fellow presidential hopeful Carly Fiorina: “Look at that face! Would anyone vote for that? Can you  imagine that, the face of our next president?” Trump quickly tried to backtrack, saying he was referring to Fiorina’s persona and not her physical appearance. However, when asked to address Trump’s comments during the Republican debate-and what she thought of Trump’s comments, Fiorina cooly replied, “I think women all over this country heard very clearly what Mr. Trump said.”  For the rest of the debate, Fiorina presented well-prepared and substantive comments with her signature poise and CEO-type presence. After the debate, commentators said Fiorina shined and many agreed she had some of the clearest policy positions and the most well-rehearsed responses of any candidates that night. She also experienced a subsequent uptick in the polls. ​

Only two of the 190 ranked countries in the world have greater than 50% women in their lower or single House, based on the Inter-Parliamentary Union’s research. The IPU’s ranking is a great resource that allows people to see how their country ranks in women’s representation relative to other countries.

Unfortunately, the IPU numeric ranking is misleading. Here’s why: the ranking groups countries that tie as sharing one ranking. For example, Iceland is ranked 11th, according to the new IPU ranking, tied with Namibia and Nicaragua. Following those three countries is Spain, ranked at 12th. A common understanding of ranking 12th globally is that only 11 countries would be ranked higher. That isn’t the case. In fact, 13 countries are ranked higher than Spain. This means an accurate ranking for Spain is 14th in the world. The IPU ranking puts the United States at 76th, but in reality 95 countries rank higher which places the United States at 96th.

It’s tempting to be really encouraged about the state of women’s representation in politics today. After all, we've seen success stories everywhere. Elise Stefanik, a Republican out of New York, earned the title of youngest congresswoman ever elected when she took office in 2014. Mia Love became the first black Republican woman to be elected to Congress when she won in Utah that same year. In fact, all over the country, 2014 was hailed as a “Year of Women.”

No Parity in Sight for Women in U.S. Politics Part Two: The Mathematical Glass Ceiling

As Molly Rockett recently observed, the percentage of women in American state legislatures has stalled at 25% for nearly a decade since making impressive gains in the 1960s and 1970s. 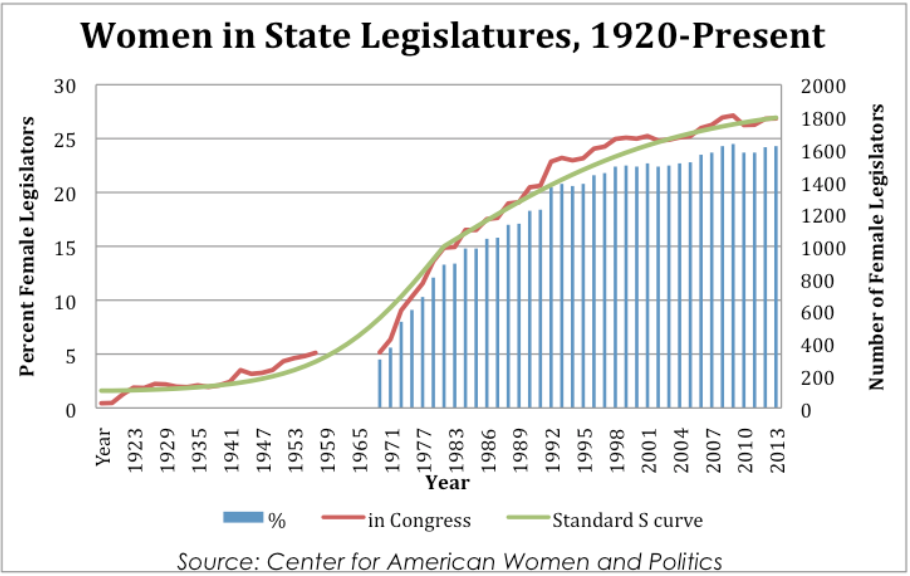 Four Reasons Why We Need More Women in Office

Representation 2020 works to raise awareness of the underrepresentation of women in elected office, to strengthen coalitions in support of equitable women’s representation, and to highlight the often-overlooked structural barriers to achieving gender parity in American elections.

Women are more than half of the American population, and yet they only hold a fifth of seats in Congress, a quarter of state legislative seats, and are only one in ten state governors.  There are at least four reasons why we should care about the dismal state of women’s representation in American today and actively pursue gender parity in elected office.

Representation 2020: Their Mission & Why it May Just Work: NWPC blog By Alexa Zogopoulos & Mallory McPherson-Wehan

Women make up 50.8% of the population in the United States, but only 19% of Congress. Do we still live in a representative democracy if women are not being equally represented? It is easy to advertise these statistics and demand change, but if you have no actual plan to achieve gender parity, then your quest may be in vain. Representation 2020 seeks to present a plan with reasonable goals in order to “raise awareness of the under-representation of women in elected office, to strengthen coalitions that are supportive of measures to increase women's representation, and to highlight the often overlooked structural barriers to achieving gender parity in American elections.” Before we explain how exactly Representation 2020 seeks to raise awareness and make these landmark changes, let’s first explain why we need groups like this.