Last semester, one of my professors told me that political scientists have a bad habit of hypothesizing really broadly about the nature of our political systems and then hoping those theories “stick”. Though this feels overly simplistic, I am somehow completely on board with the theory that “descriptive representation” can help fix everything -- that is, electing representatives whose identities reflect the diverse identities of their constituents. Descriptive representation means women, LGBTQ folks, and people of color in office. It means we can look at our government and see ourselves represented there. It brings Washington D.C. closer to home. It means issues and policy needs that no committee of white men could have imagined are brought to the table. And it gives more people stake in the process, which is the most fundamental part of our participatory democracy. With Marianne Schnall at the launch of her terrific Year of Women project in NYC
Happy almost summer!
There were several articles this week that caught my eye including this one from Oklahoma Watch about the gender gap that still persists despite the increase in the number of women running:

This year, there will be nearly four times as many women running for the same number of seats. And following a trend across the nation, women will be better represented on the ballot than in at least a decade – and likely ever.

Female lawmakers say women bring a different perspective and tone to the often-contentious world of lawmaking. But Oklahoma’s gender disparity in the Legislature, which is among the most heavily male dominated in the country, is likely to continue despite movements such as the Oklahoma teacher walkout, the #MeToo movement and liberal opposition to President Donald Trump that have motivated more women across the country to enter politics. 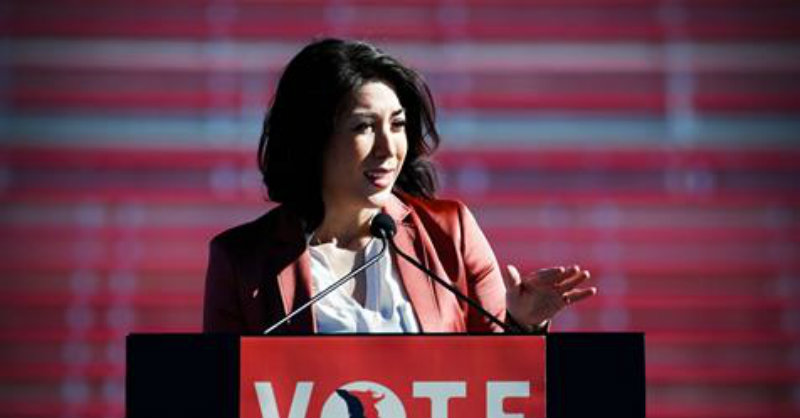 Chrissie Castro just emailed to say that Paulette Jordan is also the first woman and Native American to win the Democratic gubernatorial nomination in Idaho - there was a story on Vox about her win and another on Krem2 about this terrific news!

My apologies for not including this in round one!

Weekend Reading on Women's Representation May 25, 2018 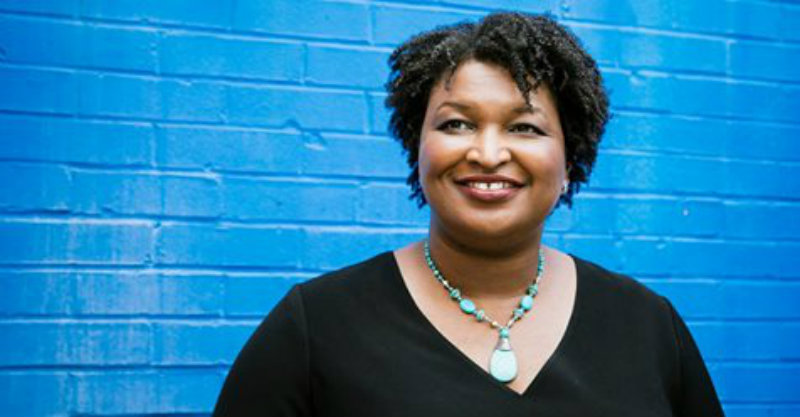 Four states held primaries/runoffs this week: Texas, Georgia, Kentucky, and Arkansas. I worked hard in 1989 to elect Douglas Wilder to be the first male Black governor elected in the United States so it's particularly exciting to report that Stacey Abrams won the primary in Georgia and now moves forward to the general election. A win in November would make Abrams the first female Black governor in the US. The New York Times reported on her win and Kelly Dittmar from the Center for American Women & Politics provides yet another terrific summary of election outcomes:

Among the notable results for women in Tuesday’s primaries in Arkansas, Georgia, Kentucky, and Texas (primary runoffs):

Weekend Reading on Women's Representation May 18, 2018 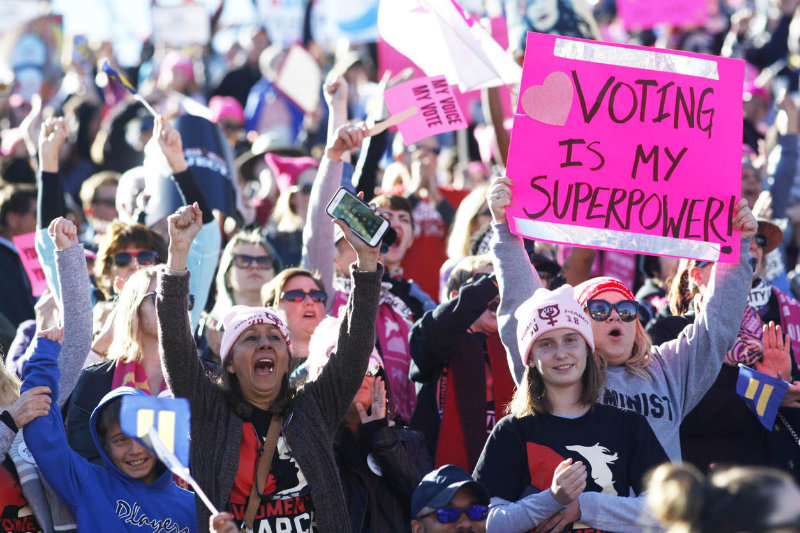 Another round of primaries this week resulted in wins for women in crowded primaries at the state and federal level - as the New York Times reports:

Just as the women’s marches and #MeToo helped define 2017, the surging numbers of female candidates have defined the midterm races now underway. Yet for all that, the November elections may not produce a similar surge in the number of women in Congress.

More than half the female candidates for House and Senate seats are challenging incumbents, who historically almost always win; there were far more wide-open races in 1992’s so-called Year of the Woman, which doubled the number of women in Congress. A large percentage of the women now running for open seats are in districts that favor the other party. And many female candidates are clustered in the same districts, meaning many will be eliminated in this spring and summer’s primaries.

Last Tuesday’s primary elections in Ohio, West Virginia, Indiana and North Carolina help illustrate the steep path. Two women ran for Senate, both were long shots, and both lost. In House races, 27 women won — more than half. But 16 will challenge incumbents in November, 15 of them in districts firmly favoring their opponents...

Weekend Reading on Women's Representation May 11, 2018 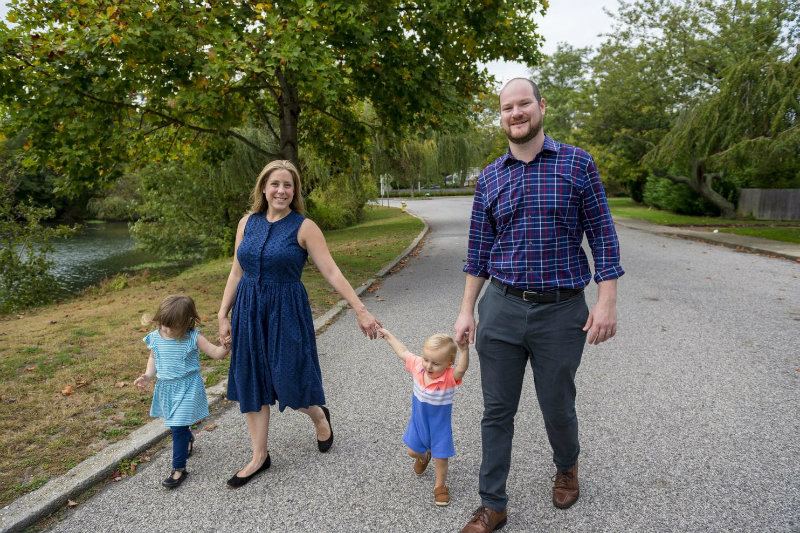 I'll start this week with some truly great news! The Washington Post was among a number of news outlets that covered the FEC's decision to allow candidates to pay for childcare from money raised for their campaign. RepresentWomen has been talking about this and other rules changes that level the playing field for women in politics so it's great to see this precedent being set. Post columnist Julie Zauzner writes:

Postscript to Weekend Reading on Women's Representation May 4, 2018

As a postscript to my message yesterday about the questions posed by a reporter to mayoral candidate Jane Kim, I thought I would share the following:

* The San Francisco Chronicle has taken the reporter off coverage of the San Francisco mayoral race. Tim Redmond of 48 Hills has a helpful account of what happened. My underlying point remains the same, the media can play a key gatekeeper role, and often holds women candidates - particular in executive races like mayor, governor, and president - to a higher standard than it holds men.
Read more

Weekend Reading on Women's Representation May 4, 2018

A series of events - both fortunate and unfortunate - have required my time these last few days so I thought I would share one story from this week that seems to me to embody some of the challenges women face when running for office.
Reading the text below is a reminder of the various types of 'gatekeepers' who impact the tone and outcomes of campaigns and must be held accountable for their behavior.
I will be interested to know what you think.
Hope you have a good weekend,
Cynthia
Read more 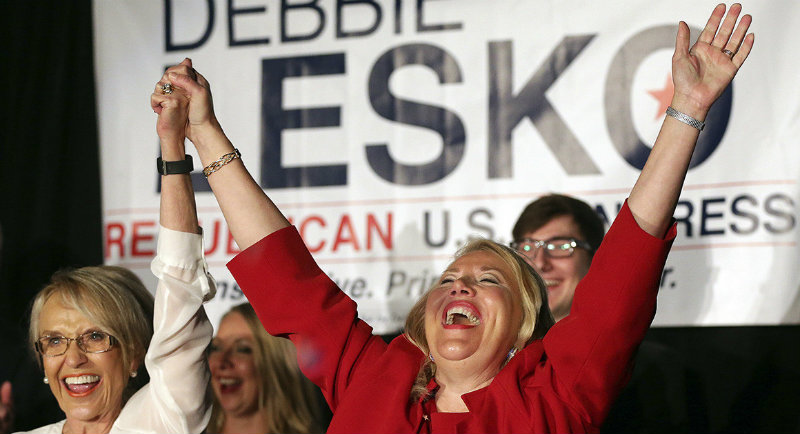 ​(Debbie Lesko R-AZ after her victory in Arizona this week)
Dear friends and allies,

Republican Debbie Lesko won the House special election in Arizona Tuesday night, holding off a closer-than-expected Democratic challenge in a district that President Donald Trump won by 21 points in 2016.

But Lesko’s single-digit margin is the latest evidence that Republicans face a punishing midterm environment, even in Trump-friendly territory. Lesko’s victory comes on the heels of losses for Republicans in southwestern Pennsylvania, where Democratic Rep. Conor Lamb beat Republican Rick Saccone in a district that backed Trump by nearly 20 points in 2016, and in Alabama, where Democrat Doug Jones defeated Republican Roy Moore last year. In many other special elections that Democrats have lost, the vote has shifted sharply in their direction compared to the 2016 presidential results.

What the U.S. House Bill on Sexual Harassment Could Mean for the Future

A recent bill was passed in the U.S. House of Representatives modifying the way that sexual harassment cases are handled on Capitol Hill. The proposed bill would change many of the procedures that are currently in place under the Congressional Accountability Act of 1995. Per the 1995 act, victims are required to attend counseling for months before they are able to file a formal complaint about their sexual harassment.

The new bill would change this mandatory meditation period, allowing victims to take action as soon as they have experienced an incident of harassment or assault. Additionally, current victims of sexual harassment or assault do not have easy access to the resources they may need to receive fair representation.(1) The new bill provides victims with legal representation once a complaint has been filed. Finally, the new bill holds the sexual harasser accountable by using his or her own funds to pay the settlement. This differs from the current act in which the accused can use taxpayer dollars to pay sexual harassment settlements. Now, the person accused of sexual harassment is required to reimburse the U.S. treasury within 90 days, or their wages would be garnished.(2)