As President Obama’s second-term Cabinet takes shape, the gender and ethnic composition of his team is drawing criticism from the Center of American Women in Politics, the National Hispanic Leadership Agenda Coalition and New York Democrat Charles Rangel, one of the longest serving black members of Congress. With white men nominated to the first four positions (secretary of defense, secretary of state, secretary of the Treasury and CIA director), it’s time to start asking for a government that looks like America. 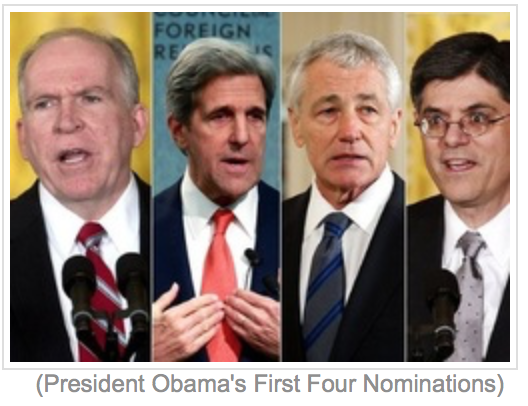 Focusing on women in particular, Obama did nominate two women to the U.S. Supreme Court, thereby tripling the number of women on the Court. He also nominated Hillary Clinton to the most prominent Cabinet position, Secretary of State. But overall, only 36 percent of his first-term Cabinet appointments went to women, slightly above the national average of 31 percent for gubernatorial appointees to state-level cabinet positions. Obama’s record eclipses that of President George W. Bush, which stood at 19 percent, despite some prominent appointees like Condoleezza Rice to be Secretary of State, but it trails that of President Bill Clinton, which made history at 41 percent.

Now, with high-profile female appointees stepping down, such as Secretary of State Clinton and EPA Chief Lisa Jackson, and qualified women being ruled out for these first four high-level appointments, including Ambassador to the United Nations Susan Rice after Republican senators threatened a filibuster, women’s advocates like Debbie Walsh, the director of the Center for American Women and Politics, worry that ground is being lost.

One factor that may contribute to a lack of diversity in Obama’s first Cabinet nominations is the appointment confirmation process. His nominees must be confirmed by the U.S. Senate. Consequently, they must be able to pick up a number of Republican Senate votes. In this highly polarized political climate, “safe” nominations may save the President some political capital. Nevertheless, there is a particular irony in the fact that women had such a big impact on the election, with women giving Obama an 11-point-advantage over Republican Mitt Romney. Men preferred Romney by a margin of 52 to 45 percent.

Obama responded to criticism by affirming his commitment to diversity, “I’m very proud that in the first four years, we had as diverse, if not a more diverse White House and Cabinet than any in history, and I intend to continue that.” He has asked his critics to withhold judgment until he has made all of his nominations.

Too few women in Cabinet positions can lead to tunnel vision in policy making, as the executives receive less varied input. Women, more than men, tend to focus on issues that affect women, children and families. Without the ear of the executive, these issues are more likely to be under prioritized in an administration. Moreover, without a 100 percent talent pool, an administration is less likely to effectively meet the needs of its citizenry. New Hampshire Democratic Senator Jeanne Shaheen, whose state has the only all-female delegation in Congress, voiced these issues, "We need a government that looks like America so we can address the concerns that we hear from across the spectrum.”

Some states, such as Iowa, recognize the importance of a female presence in administrations. Iowa has instituted a "gender balance law", which requires state level officials to actively seek out women for appointments, balancing the gender ratio of these positions. A good-faith effort is required on the local level. Interest groups have taken another route, seeking pledges from governors to appoint women at the same rate as men.

Regardless of the strategy taken to get more women into appointed positions, our executives, whether or not they relied on the female vote, must acknowledge the importance of having women at the table. Moreover, women should hold an equitable percentage of high-level Cabinet positions – particularly State, Treasury, Defense and CIA – especially when these positions are rarely associated with or held by women.

As we move forward, a renewed commitment to the promise of the Suffrage Movement is needed: it’s time women have an equal say in government.