The 2019 elections heralded many local victories for women across the country—including the decision by voters in New York City to adopt ranked choice voting.

Eleven jurisdictions used RCV on November 5, including five that used it for the first time—and women were big winners. Among the nine jurisdictions using RCV to elect their city councils, three are now majority women, and a fourth has a majority of women on its combined city council and school board elected by RCV. In the five cities electing mayors with RCV at the ballot box, women won three races, including two challengers who defeated incumbents in multi-candidate races.

One of the greatest barriers facing women candidates in our political system is a single-choice, winner-take-all electoral system first used over 200 years ago—when women didn’t even have the right to vote, let alone the ability to run for office. Systemic challenges require systemic solutions like RCV, which has been shown to increase the number of women and people of color running in and winning elections.

We know it works, because we saw the results last Tuesday. 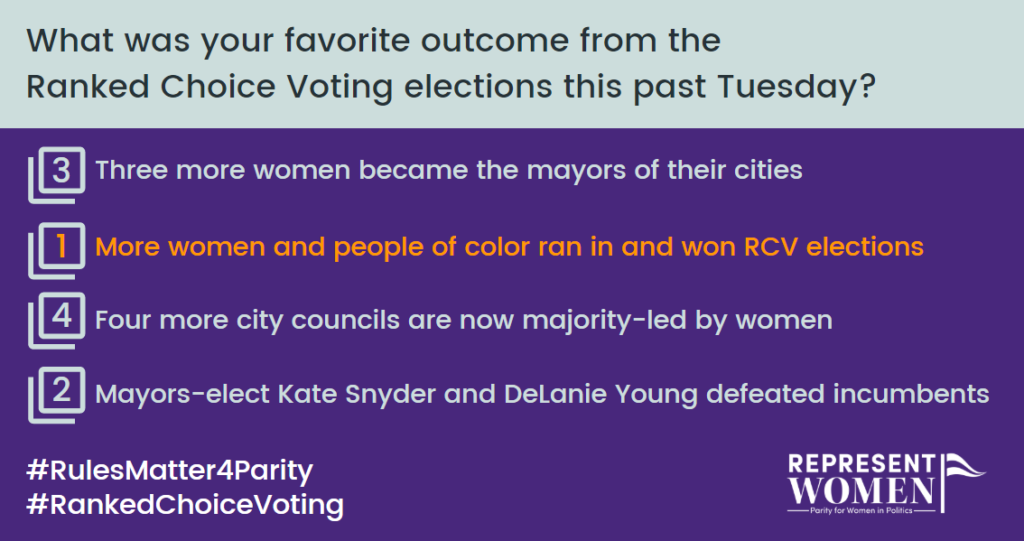 Let’s start with the mayoral races, all of which had more than two candidates running. Two incumbents were returned with lopsided victories: London Breed in San Francisco and Jake Spano in St. Louis Park (MN). Breed is one of only 27 women mayors in the 100 most populous cities in the U.S.; she first won in 2018 in a highly competitive mayoral race. In a 10-candidate race in Las Cruces, Mayor Ken Miyagishima had a large first choice lead and won with 55 percent in the final instant runoff.

Portland, Maine elected a woman mayor for the first time. Kate Snyder defeated three male opponents: incumbent Ethan Strimling, City councillor Spencer Thibodeau and Travis Curran. In the first round, Snyder had 39 percent of the vote—followed by Thibodeau with 28 percent, Strimling with 25 percent and Curran with 6 percent. The second round, an “instant runoff” between Snyder and Thibodeau, resulted in Snyder winning the race with 62 percent of the vote.

Snyder’s victory comes despite her two leading opponents outspending her by significant margins, and Mayor Strimling’s incumbency. In the small ski town of Telluride, Colorado, DeLanie Young pulled off a similar victory, winning the mayoral election against incumbent mayor Sean Murphy and David Oyster despite Murphy outspending Young by nearly 10-to-one. Young won the race in the first round of voting with 53 percent of the vote, eliminating the need for an instant runoff.

These victories were possible because of RCV, which changes what it means to run a successful campaignby creating new incentives for campaign approaches rewarding direct engagement with more voters.

RCV also resulted in several city council victories for women candidates across the country. The city council in Las Cruces, New Mexico reached gender parity. Women candidates swept all three council races, doubling the number of women on the six-member city council from two to four. Incumbent Kasandra Gandara (District 1) won in the first round, and the other two races were decided in instant runoffs: Tessa Stuve (District 2) won in third round with 55 percent of the vote and Johana Bencomo (District 4) won in the second round with 65 percent of the vote.

In Santa Fe, New Mexico, Jamie Cassut-Sanchez won her city council election by defeating her two male opponents in the first round with 56.9 percent of the vote—giving women a majority on the council for the first time. Santa Fe had first used RCV in the 2018 city council elections, resulting in four men and four women on the council this past term.

In Cambridge, Massachusetts, women won eight of the 15 seats elected by RCV this week. Candidates run citywide for nine city council seats and six school committee seats, with the fair representation form of RCV. In council races, each seat is elected with support from about 10 percent of voters, and it takes just over 14 percent of the vote to win a school committee seats.

In a city council race with 22 candidates, Patty Nolan and Jivan Sobrinho-Wheeler will join seven incumbent councillors who won re-election. With the addition of Nolan to the city council, women now hold four seats. Women also won four of six seats on the school committee. The three incumbents, Manikka Bowman, Emily Dexter and Fred Fantini, all won were re-elected and are joined by three newcomers: women Ayesha Wilson and Rachel Weinstein and man José Luis Rojas Villarreal, which increased the number of women to four and people of color to three. (Once chosen by her or his fellow city councilors, the mayor will serve as the seventh member on the committee.)

St. Paul, Minnesota also held city council election with RCV for seven seats on Tuesday, with voter turnout doubling from 2015 and women winning four seats. Only 24, Nellie Yang is poised to become the fifth woman on council, the first Hmong woman and the youngest member of the council in its history. In the first round of vote counting, Yang won 45 percent of the vote. The “instant runoff”hand-counted tally will start later this week, with Yang favored to win.

St. Louis Park (MN) this year held its first RCV election. Only one race had three candidates, triggering an instant runoff. Women earned a fourth seat on the six-member council, however, when Nadia Mohamed, a 23-year-old Somali American, won an open seat in a two-candidate race.

California is slow to process ballots, meaning that two razor-thin elections with RCV in San Francisco are still too close to call. Women are in the running for District Attorney and a seat on the Board of Supervisors. Women also won city council seats in contested RCV elections held in Eastpointe, Michigan; and Payson and Vineyard in Utah.

Although it is not possible to say these women’s successes are a direct result of RCV and only RCV, we cannot discount the impact such systemic electoral changes can have on women running for office. Along with increasing the number of women and people of color in elected positions, RCV encourages cooperative campaigning, discourages negative campaigning and prevents vote-splitting. Women who have run have cited these changes a central reason they choose to run in the first place.

Former Mayor of Minneapolis, Betsy Hodges suggests these benefits of RCV played to her strengths as a candidate and how she preferred to campaign. As the number of women and minorities that run increases so too does the number in office. According to a study conducted by RepresentWomen in 2016, “the structures and rules a community adopts for choosing representative impacts who gets elected,” and who runs—so it benefits a representative democracy to adopt a voting system which allows diversity to flourish in elected offices.

Maura Reilly is a RepresentWomen Fall 2019 Research Intern from the Washington, D.C. area. She graduated from the University of St. Andrews in Scotland with an honors degree in Social Anthropology.
Share