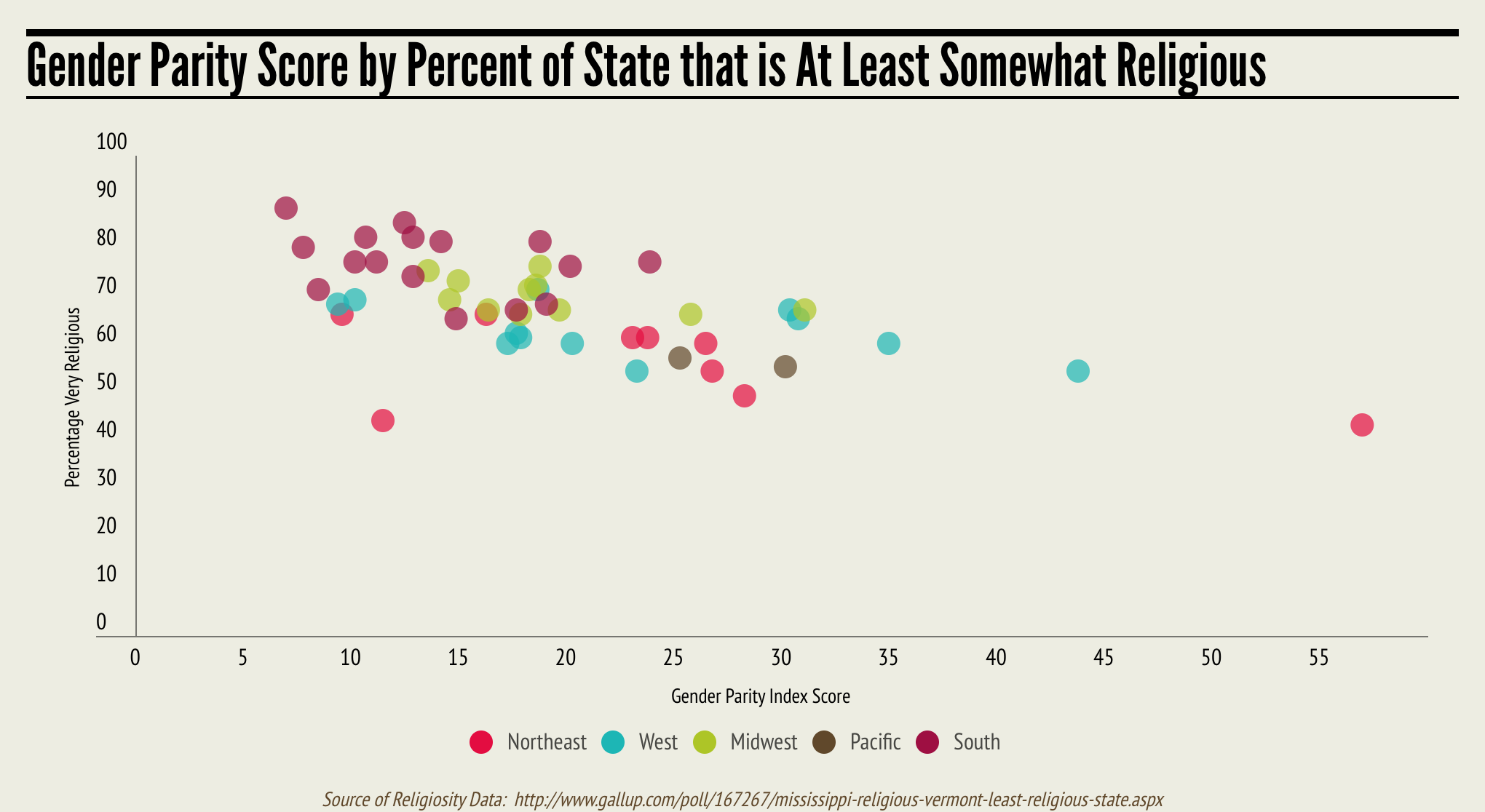 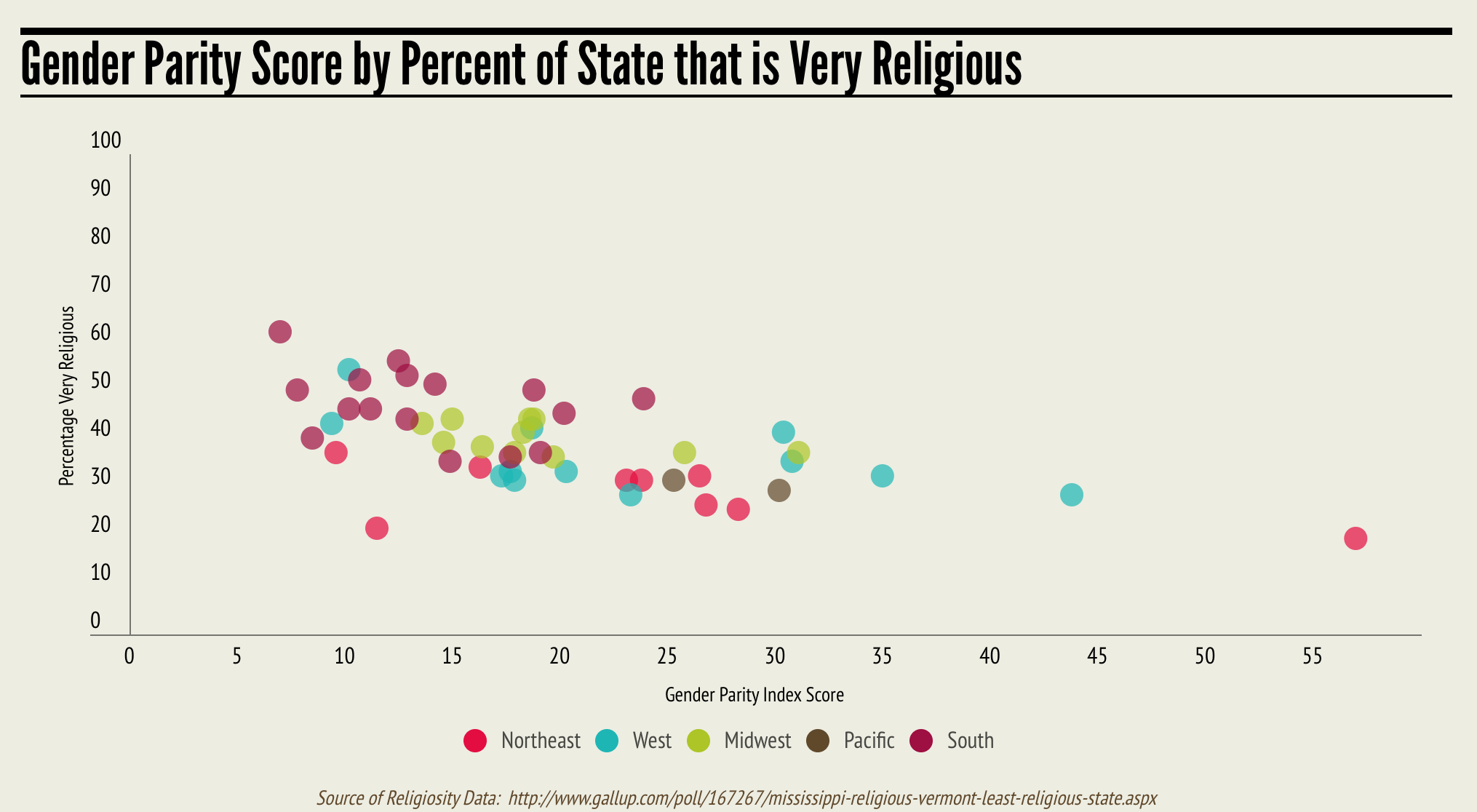 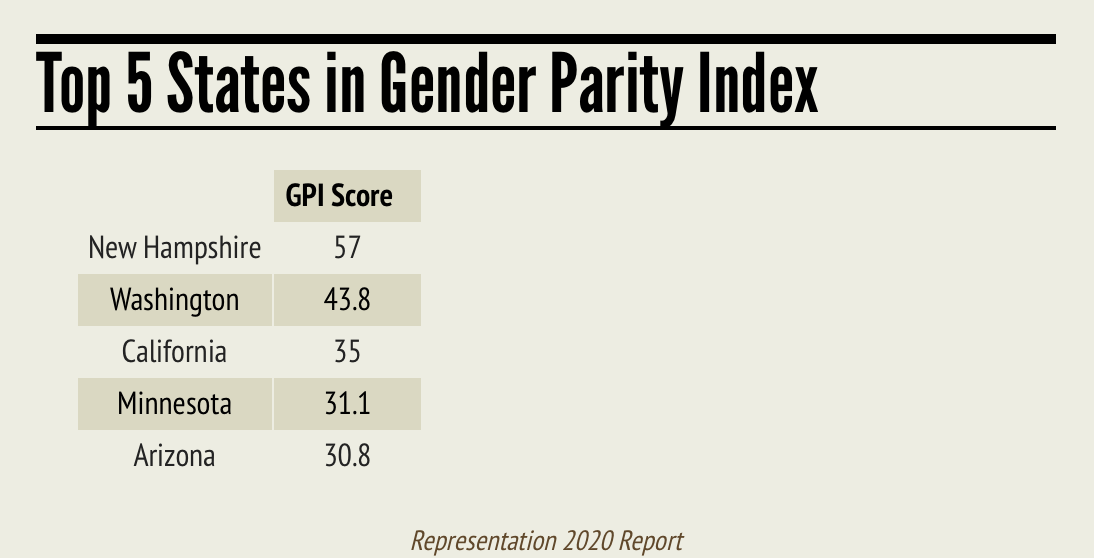 A 2008 Pew Research Center study into public perceptions of women running for office and working outside the home offers insight into why a state’s gender parity score is so closely related to the proportion of the state’s residents who describe themselves as religious.  Religious voters had much more traditional views of gender roles than the rest of the surveyed population: 56% of white evangelical voters viewed mothers of young children working outside of the home negatively, while only 14% have positive views of working mothers. By contrast, only 32% of secular (non-religious) voters held negative views on working mothers and 25% held positive views.

Partisanship and the Gender Parity Index

There is a lower correlation between a state’s gender parity score and its partisanship (r2 of .21) in comparison to parity and religion (r2 of .51 excluding Vermont). This weak correlation is surprising given the close relationship between attitudes toward women and partisanship.  In the same Pew Research Center study discussed above,public opinion overall favors women over men in most desirable leadership traits, and 69% of respondents felt that both men and women make equally good leaders.  However, they found significant differences between the willingness of Republican and Democrats to vote for female candidates.

The Center asked respondents to choose between hypothetical candidates. The hypothetical candidates had identical biographies and experience, except one was a woman without children (“the woman”), one was a woman with young children (“the mother”), one was a man without children (“the man”), and the other was a man with young children (“the father”). The study found that Republicans were 7% more likely to vote for the woman than the mother and were 10% more likely to vote for the father than for the mother. Democrats, on the other hand, prefered the mother over the father and did not favor either the man or the woman over each other.  The report calls this difference a “mommy penalty” among Republicans.

The Interplay of Partisanship and Religiosity

There is a close relationship between partisanship and religiosity. At the state level, voter partisanship is closely correlated with the percentage of voters who describe themselves as very religious. The Pew Research Center conducted another study on how Americans vote in elections by religiosity.  The results are striking: in 2014, voters who attend religious services once a week or more voted Republican by a margin of 58% to 40%, while those who never attend religious services voted Democrat by an even greater margin of 62% to 36%. Seventy-eight percent of evangelical voters chose Republicans in the 2014 elections, and evangelical born-again Christians make up 50% of Republican primary voters.  Even voters (of any religion) who went to religious services only once a year are more likely to vote Republican than Democrat, but by much smaller margins. Republican voters tend to be more religious than Democratic voters, and those who are more religious tend to have more traditional views of gender roles, which in turn means that there would be a “mommy penalty” that disadvantaged women, and specifically women with young children, among religious voters in the Republican Party.

How can we solve this problem?

The only way to surmount the “mommy penalty” imposed by conservative religious voters would be to change attitudes towards women in the workplace and in government.  In order to do this, we need more women to serve as positive examples of effective leaders.  The best way to get there is through the parties: if both parties agree to support an equal number of men and women in primary races and general elections, more women will win.  As the Women in Representation Report outlines, both parties spend more effort and money training and promoting male candidates than they do for female candidates.  With more women for voters to choose from, more women will inevitably win elections, bringing us closer to parity.