An Electoral Race to Parity: Reflecting on Christine Quinn’s Defeat 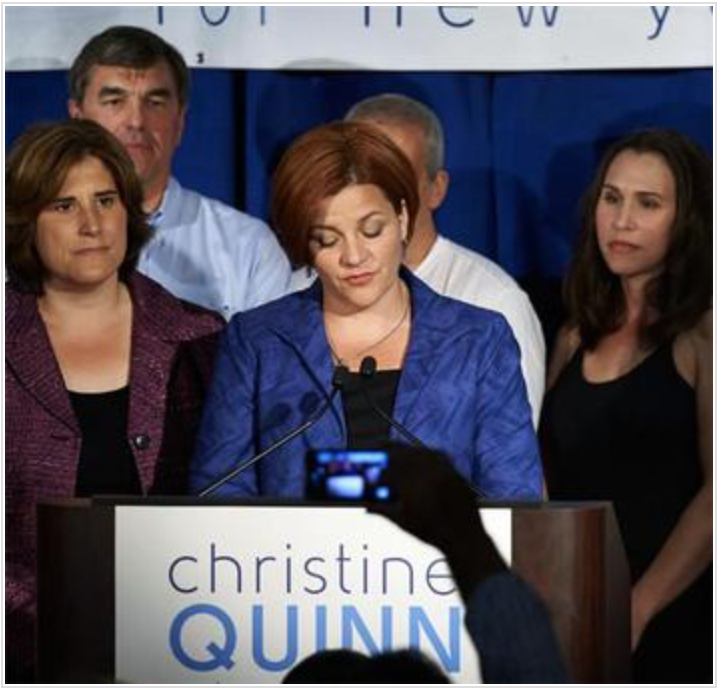 Representation of women in the United States Congress lags behind more than 90 nations. It is even worse for governors and mayors: women make up only 10% of our governors and 12% of mayors in our 100 largest cities. The recent New York State mayoral primaries reflect some improvement in women’s representation through municipal leadership, but also highlight a persistent, nationwide problem of a lack of women candidates running for elected offices.

Christine Quinn earned a mere 15.5% of the votes – 100,020 votes – in the 2013 New York City Democratic mayoral primary on September 10. Out of 9 candidates in the Democratic primary and 3 in the Republican primary, Quinn was the only woman running. For much of the race, Quinn had been considered the frontrunner.

Some hypothesize that she lost in part because of her gender. However, the real concern is: why was Quinn the only female candidate running in an open seat in such an important election? Why, in the largest city in the United States for one of the most visible public offices, was there such a dearth of female candidates? This election reflects the broader problem of a lack of parity in politics – women are not as likely as men to run for office.

There were other possible reasons for Quinn’s defeat aside from her gender. In particular, Quinn was often criticized for her strong association with Mayor Michael Bloomberg, and New York voters wanted a more dramatic change in leadership. Regardless of whether gender played any role in Quinn’s poor results, the biggest reason that New York City did not elect its first female mayor this year is that Quinn was the only female candidate out of a field of 12 running.

The absence of women was echoed in Boston’s September 24 nonpartisan mayoral primary, where Charlotte Golar Richie was the sole woman running in a field of 12 candidates. Richie finished in third place, short of a spot in the runoff election.

However, there was good news for women on September 10 in New York State. In Syracuse, Rochester, and Albany, female candidates won their Democratic primary nominations and have a good chance to win in November. Additionally, in New York City, women won Democratic nominations for Borough President in two of five boroughs and a place in the runoff to replace Bill de Blasio as Public Advocate.

As we celebrate the possibility of increasing women’s representation through municipal leadership, we should remember that these few examples of women succeeding electorally are not enough. While women’s representation is lowest in top executive positions, women make up only 18.3% of Congress and a meager 24.2% of state legislatures. Women are less likely than men to feel capable of running for office and are less likely be nominated by their political party.

Despite the low number of women running for elected offices, they have proven to be effective advocates. Not only do female legislators sponsor and co-sponsor more bills than their male counterparts, but they are also 31% more effective at advancing the proposed legislation. Finally, including more women in elected offices would allow for more diverse perspectives and possibilities for positive change.

Although some celebration is in order for the women who won New York State mayoral primaries, there remains substantial room for improvement. That is why FairVote, a non-profit organization dedicated to fair elections, fair citizen participation, and fair representation has launched its Representation 2020 campaign. The campaign seeks to encourage greater female representation in electoral politics with concrete suggestions for reform. Our 2020 Pledge lays out six steps that we ask individuals and organizations to endorse. These include structural reforms such as new party rules and fair representation voting methods that can make it easier for women to run for elected offices.

Women are not underrepresented in the United States population – but they are in our politics. Gender parity means that in any given election, a female candidate should be just as likely as a male candidate to win. In the New York City mayoral primaries, gender parity did not exist – not because Christine Quinn lost, but because voters who wanted an alternative to Quinn could only choose among men.

Update 10/03/2013: Councilwoman Letitia James will be the Democratic nominee for Public Advocate after winning the primary runoff on October 2nd – another important victory for a woman in New York State. Without a Republican opponent in November, she is very likely to serve as the second-ranking member of New York City's government.