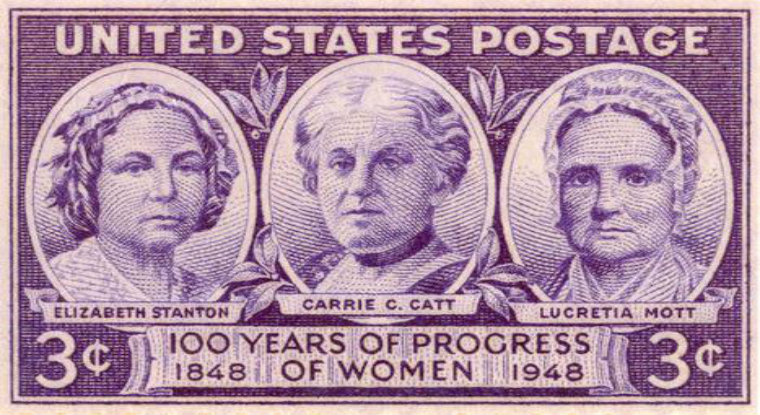 This push for a women’s rights convention stemmed from the fight to end slavery. At an Anti-Slavery Convention in London in 1840, both Elizabeth Cady Stanton and Lucretia Mott were banned from speaking on the floor because they were women. This led the women to realize that as they fought for African-American rights, they could also fight for women’s rights, as both were marginalized groups in a white, patriarchal world. 8 years later, this impetus was realized with the Seneca Falls Convention. The two women, along with Mott’s sister, Martha Coffin Wright, and Jane Hunt and Mary Ann McClintock, sent out an announcement in the Seneca County Courier, the local paper of where Stanton lived. The announcement, inviting women and men to attend, read:

“A Convention to discuss the social, civil, and religious condition and rights of women will be held in the Wesleyan Chapel, at Seneca Falls, N.Y., on Wednesday and Thursday, the 19th and 20th of July current; commencing at 10 o’clock A.M. During the first day the meeting will be exclusively for women, who are earnestly invited to attend. The public generally are invited to be present on the second day, when Lucretia Mott, of Philadelphia, and other ladies and gentlemen, will address the Convention.”

The first day garnered more than 200 participants, and Stanton presented the “Declaration of Sentiments and Resolutions” that she had drafted. This Declaration detailed the “injuries and usurpations on the part of man toward woman,” much like the way the Declaration of Independence levied charges against King George III. The Declaration of Sentiments also had 12 resolutions that were voted on and subsequently passed, including the recognition of equality between men and women, women’s suffrage, and ”equal participation with men in the various trades, professions and commerce.”

Following the Seneca Falls convention, the Declaration of Sentiments underwent severe scrutiny, and several signers withdrew their names due to intense social pressure. The work of Stanton, Mott, and others continued, as the ratification of the 15th Amendment allowed all men to vote, but still left women disenfranchised. It would take until 1920, when only one signer of the Declaration of Sentiments was still alive, for white women to gain the right to vote in the United States, and even later into the century for all women to be equal under the law.